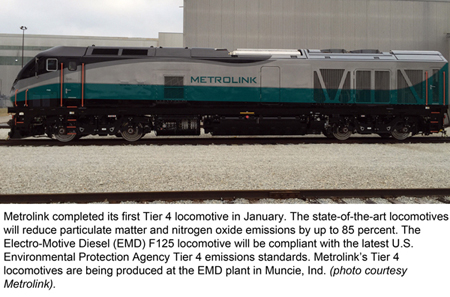 LOS ANGELES – This past week, Metrolink’s first Tier 4 locomotive was completed. The state-of-the-art locomotives will reduce particulate matter and nitrogen oxide emissions by up to 85 percent. In addition to environmental benefits, the new engines will have up to 57 percent more horsepower allowing Metrolink to move people more quickly and reliably.
“On behalf of the Metrolink Board of Directors, we thank our state and federal legislative delegation, along with local community, business and environmental stakeholders for their leadership and support in this effort,” said Chair of the Metrolink Board of Directors Shawn Nelson, who is also an Orange County supervisor. “Upgrading our fleet with Tier 4 locomotives has taken a great deal of support and collaboration. We could not have done this alone and we look forward to full implementation of the entire 40 locomotive fleet.”

Metrolink became the first commuter rail agency in the country to purchase Tier 4 locomotives in 2013. The long-term Metrolink fleet plan calls for up to 40 new Tier 4 locomotives expected to cost approximately $280 million.
“Completion of Metrolink’s first Tier 4 locomotive is an important milestone in the effort to improve California’s air quality,” said California State Senate President pro tempore Kevin de León. “The emissions reductions promised by these state-of-the-art locomotives will lead to cleaner air and a healthier environment for the people of Los Angeles and Southern California.”
Funding has been provided through the South Coast Air Quality Management District’s (SCAQMD) Carl Moyer Program and the State of California’s Transit and Intercity Rail Capital Program (TIRCP). The remaining budget will be accounted for through a combination of Metrolink member agency contributions and other subsidies.
“Transitioning to cleaner locomotives is vital to achieving our clean air goals for Southern California,” said SCAQMD Chairman William A. Burke, Ed.D. “We are pleased that Metrolink is participating in this transition which will benefit the health of the 17 million residents in our region.”
In the past three years, SCAQMD approved $74.85 million in Carl Moyer Program allocations to Metrolink, with an additional $36 million to be considered in future requests. The California State Transportation Agency provided $41.2 million from the TIRCP.
“The Brown Administration continues to invest Cap and Trade dollars to clean public transit and to sustainable community development,” said California Transportation Agency Secretary Brian Kelly. “We’re pleased to see Metrolink’s first Tier 4 locomotive – with more locomotives on the way – thanks to funds made available through the Transit and Intercity Rail Capital Program; I hope operators around the state take note at the great things this program can accomplish from a transportation and environmental perspective. Congratulations Metrolink!”
The Electro-Motive Diesel (EMD) F125 locomotive will be compliant with the latest U.S. Environmental Protection Agency Tier 4 emissions standards.
The first of the low-emission locomotives are expected to begin operating throughout the Metrolink system in late 2016, with the remainder arriving in 2017.
Metrolink’s Tier 4 locomotives are being produced at the EMD plant in Muncie, Ind.
For more information regarding Metrolink service go to www.metrolinktrains.com.
CONTACT: Sherita Coffelt at coffelts@scrra.net or (213-452-0318); Scott Johnson at johnsons@scrra.net or (213) 452-0205.
ABOUT METROLINK (www.metrolinktrains.com)
Metrolink is Southern California’s regional commuter rail service in its 23rd year of operation. The Southern California Regional Rail Authority (SCRRA), a joint powers authority made up of an 11-member board representing the transportation commissions of Los Angeles, Orange, Riverside, San Bernardino and Ventura counties, governs the service. Metrolink operates over seven routes through a six-county, 512 route-mile network. Metrolink is the third largest commuter rail agency in the United States based on directional route miles and the eighth largest based on annual ridership.
###