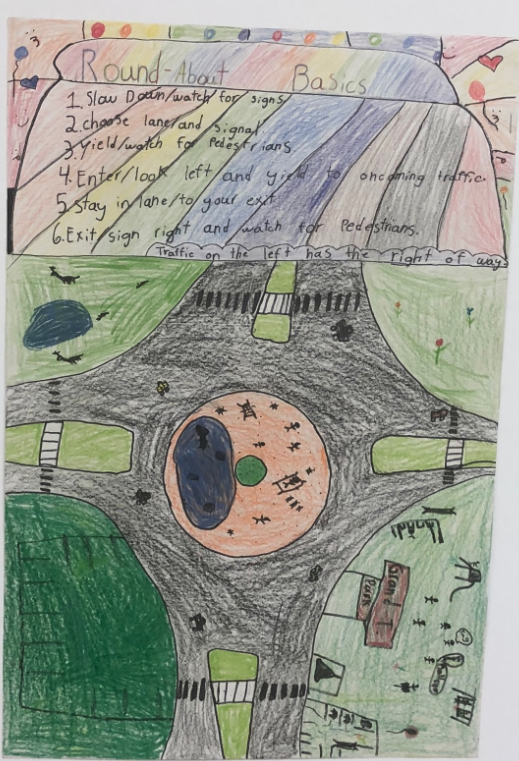 The Interstate 215 Barton Road Interchange Project is a complex engineering effort that will increase the bridge height, enhance local circulation, introduce a roundabout to facilitate transitioning on and off the freeway, and enhance overall safety on both the freeway mainline and local streets and roads. The project is nearing 50% completion as crews begin working on the demolition and reconstruction of the second half of the bridge on Barton Road that spans over Interstate 215.
One of the unique challenges of this project is its proximity to Grand Terrace Elementary School. Optimizing work windows around school calendars and maintaining safe access for the children has remained at the forefront since the beginning of the project. The relationship between the school, school board and the project team has been cooperative and productive in working through a myriad of circulation issues during various stages of the project.
But perhaps one of the more enjoyable moments came on the evening of March 1st at the annual Grand Terrace Elementary Spring Festival. SBCTA, in partnership with Principal Neera Kohli, challenged the students to participate in a two-month curriculum and contest on a STEM-related subject. All grades were extended the chance to compete in an art contest that would depict the look and function of a roundabout (one of the project features) from the perspective of an elementary school student. Dozens of entries were received and winners were selected from the K-3rd grade category and the 4th-6th grade group. Winning posters are slated to be used in a local campaign to ease concerns and educate drivers on using this new-to-the-region traffic feature.
In addition, classes in the upper grade levels were invited to participate in a Popsicle Stick Bridge Building Contest. Teams of up to 6 students were formed and they were provided kits that included 200 sticks and bottle of glue. The mini structures were judged on use of materials, creativity of design, and strength. Finalists were required to sustain 5 lbs. of weight. Strength of the stick bridges was measured by establishing its breaking point in one of three weight zones. If the bridge broke with less than 10 lbs. of weight, they were given 3 points; if between 10 and 20 lbs., they received 6 points; and, holding the maximum weight of 21 lbs., they received 10 points.  After combining all the judges’ results for style and strength, the bridge from Ms. Torres’ 6th grade class was determined to be the winner.
Grand Terrace Mayor and President of SBCTA Darcy McNaboe was among the judges that included Principal Kohli, Paula Beauchamp (SBCTA Director of Project Delivery), Dan Flores (Colton School Board Member), and Owen Chang (Colton School District Facilities Manager).  Prizes for the contestants were donated by McDonald’s – Grand Terrace, Cal Skate, and Rados-Meyers Construction.