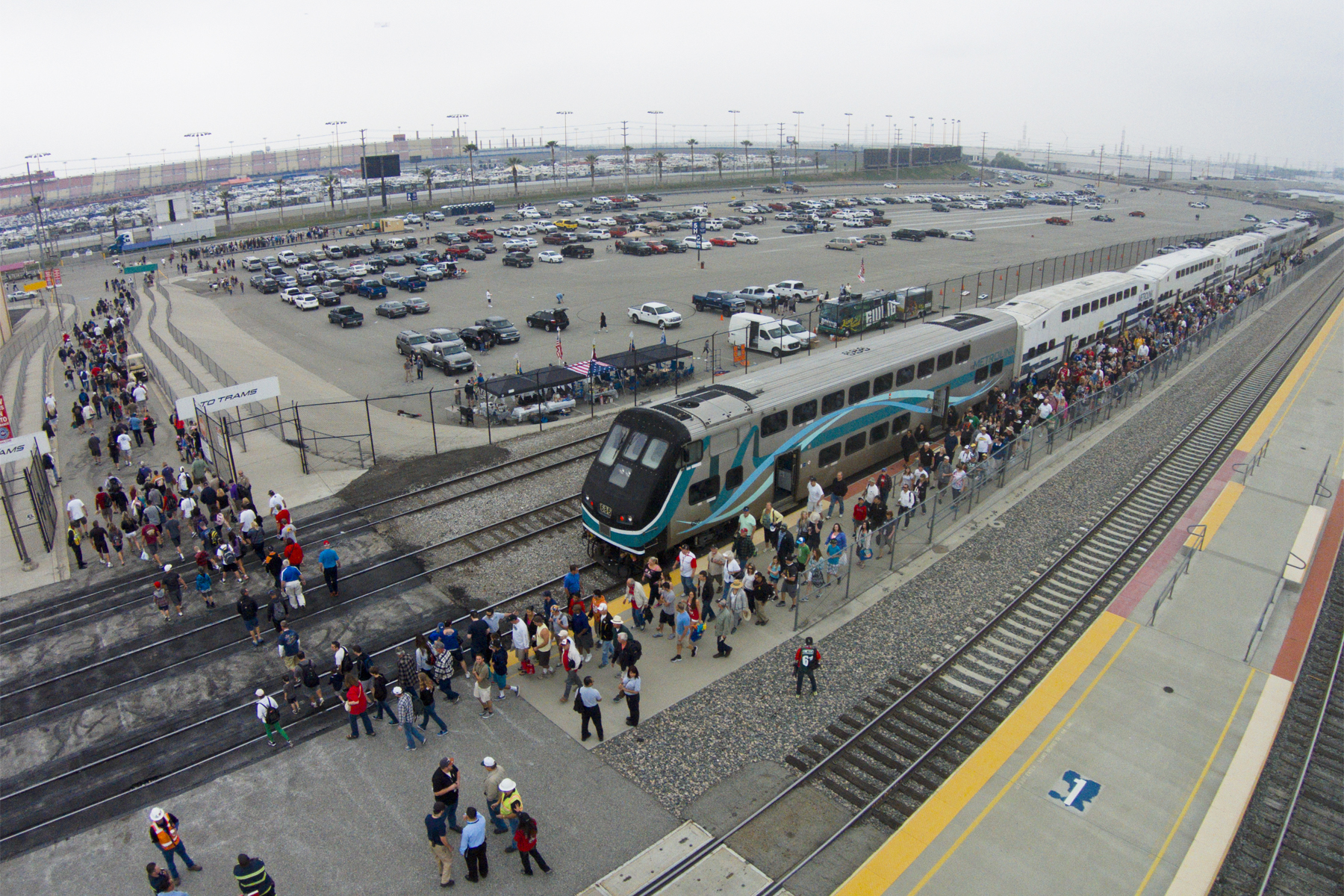 Brad Keselowski, driving his No. 2 Team Penske Ford, won the race. Keselowski passed polesitter Kurt Busch on the final lap and pulled away to win his first NASCAR Sprint Cup Series race of the season.
Like last year, Metrolink operated three trains originating from Oxnard, Lancaster, and Oceanside with limited station stops for faster service.
The round-trip trains ferried approximately 500 and 400 people, respectively, to and from Oxnard and Lancaster, while more than 500 took advantage of the service to and from Oceanside.
Metrolink’s trains to the speedway stop at a specially constructed station just off the back straight-away at the race track. From there, passengers boarded a free tram that takes them to the entrance gates.
The Metrolink train service to the Auto Club Speedway is a joint demonstration project made possible in part by Clean Transportation Funding from the Mobile Source Air Pollution Reduction Review Committee (MSRC). The MSRC’s mission is to fund projects that reduce air pollution to meet the region’s clean air goals. Over its 22-year history, the MSRC has assisted organizations throughout the Southland in removing as much as 8,000 tons of harmful pollutants from the air through innovative programs designed to reduce air pollution from mobile sources.
The primary focus of the Mobile Source Air Pollution Reduction Review Committee (MSRC) is to reduce air pollution from mobile sources. The partnership between the MSRC, Metrolink, and the Auto Club 400 does exactly that. This effort helps advance the MSRC’s mission to reduce harmful emissions from mobile sources and provides a stress-free option for race fans to get to the speedway by avoiding traffic delays.
For additional details on Metrolink, please visit www.metrolinktrains.com.
ABOUT METROLINK (www.metrolinktrains.com)
Metrolink is Southern California’s regional commuter rail service in its 23rd year of operation. The Southern California Regional Rail Authority (SCRRA), a joint powers authority made up of an 11-member board representing the transportation commissions of Los Angeles, Orange, Riverside, San Bernardino and Ventura counties, governs the service. Metrolink operates over seven routes through a six-county, 512 route-mile network, which includes a portion of northern San Diego County. Metrolink is the third largest commuter rail agency in the United States based on directional route miles and the eighth largest based on annual ridership.