Ridership surges on Omnitrans sbX and freeway route in 2016 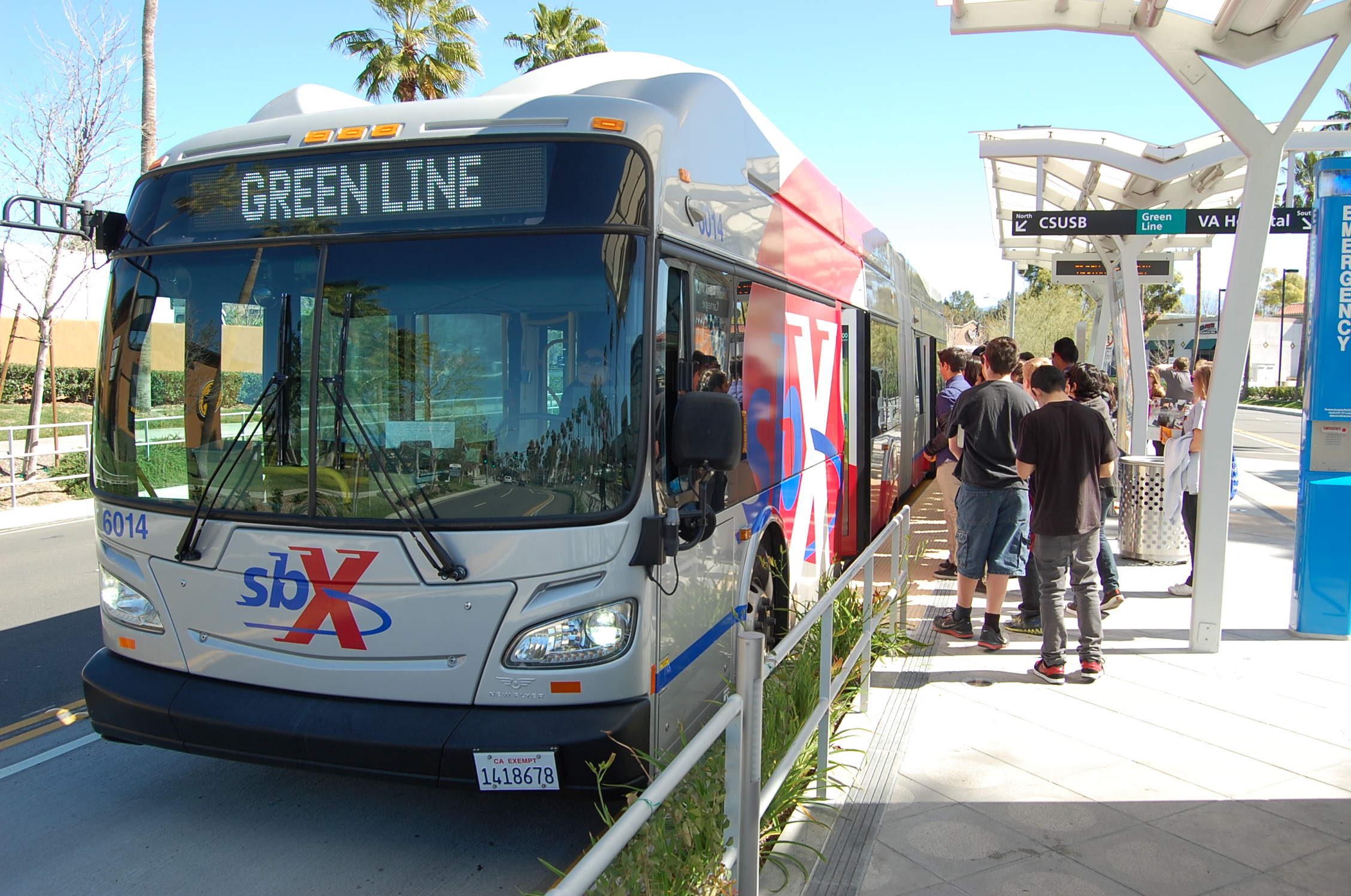 If you build a faster transit service, will they come? Apparently so for Omnitrans. Ridership on the sbX bus rapid transit line in San Bernardino and Loma Linda jumped 22% in 2016 while daily ridership on freeway express Route 290 nearly doubled.
“Over and over, customers tell us they want faster, more direct service,” said CEO P. Scott Graham. “Saving people time makes a big difference in their everyday lives. It’s gratifying to see that our investment in high quality transit is paying off for customers.”
The sbX bus rapid transit (BRT) line, which launched in April 2014, transported 742,476 passengers in 2016, up from 608,262 the prior year. End to end, taking sbX is 20 minutes faster than using the corresponding local bus route. The BRT operates at 10 and 15 minute frequency on weekdays, with stations located about every mile along the 16-mile route.
Omnitrans currently operates two freeway express routes. Route 290, which launched in September 2015, operates on the 10 Freeway stopping in San Bernardino, Colton, Ontario and Montclair. Due to rider demand, additional morning and mid-day trips were added to the route in September 2016. Riding Route 290 cuts travel time in half compared to using local bus routes. Route 290 boardings for September through December totaled 17,432 in 2016 vs. 9,052 in 2015, an increase of 93%.
Express Route 215 connects San Bernardino and Riverside via the 215 and 91 Freeways. A recent change to Route 215 added a stop at the Riverside Metrolink station. Combined, the two freeway routes carried 326,854 in 2016 vs. 320,868 in 2015, a 2% increase. On May 1, Omnitrans will add new freeway express service with Route 208 connecting Yucaipa, Redlands and San Bernardino.
All three freeway routes meet at the San Bernardino Transit Center (SBTC) to connect with sbX and local routes. Over 5,000 passenger boardings occur daily at the transit center, a regional hub used by Omnitrans and three other transit agencies.
Victor Valley Transit Authority offers a freeway route to the high desert. Mountain Transit provides service to communities in the San Bernardino Mountains. Pass Transit connects to Calimesa and Beaumont. In summer 2017, Metrolink commuter rail service will arrive at SBTC.
In contrast to gains on express services, ridership on Omnitrans local bus routes declined by 11% in 2016. “Transit bus ridership is trending down overall in our region and the nation,” explained spokesperson Wendy Williams. “We’re bolstered by the positive response to our express services and look forward to expanding them in the near future.”
Omnitrans route and schedule information is available at 1(800) 966-6428 or www.omnitrans.org.